The Guinness Book of World Records last year confirmed it as largest "bouncy" recreational device on planet.
NORCO, CA — The world's biggest bounce house will be taking over the Silverlakes Equestrian & Sports Park in Norco next month, offering both kids and adults gravity-defying fun, according to organizers.

The Big Bounce America 2019 Tour is slated to arrive Aug. 2 and continue to Aug. 18 at the park, located in the 5500 block of Hamner Avenue, just west of Interstate 15.

The Guinness Book of World Records last year confirmed that the tour's 11,433-square-foot inflatable castle is the largest "bouncy" recreational device currently on the planet.

The castle features a basketball court, giant slide and "ball pit." According to co-creator Graham Ferguson, bounce sessions are organized by age, so kids and adults can romp without being in conflict.

Along with the castle, a 900-foot-long inflatable obstacle course dubbed "The Giant" will be set up, with 50 different obstacles that steer users into tubes, over walls and down slides, Ferguson said.

Next to the obstacle course will be "airSPACE," a 25-foot tall astrally themed inflatable featuring "friendly aliens, spaceships, giant planets, moon craters" and other fare, according to a tour statement. 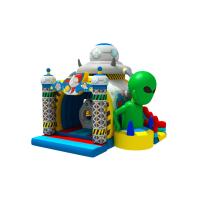